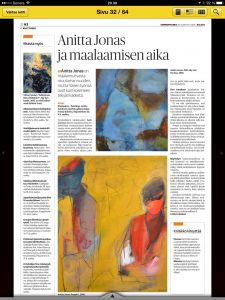 Please find a review from my exhibition in Oulu, Finland written by Leena Kangas from the Finnish newspaper Kaleva in 2016.

Anitta Jonas and the time of painting

“Anitta Jonas has been painting for just a few years, but her works are like they are from the hand of a seasoned painter”.

Danish painter Anitta Jonas tells that she painted her first paintings about 4 years ago, having inherited some colors from her father who was into painting. In just a few years Jonas has learned, studied and discovered – and painted. Now she works actively as an artist and in the last few years has held, and still does, lots of exhibitions.

When you look at Jonas’ paintings, the freshness of her artist career amazes. The paintings have certainty and poise, they are like they are from the hand of an experienced creator. You cannot help but thinking, that painting is something, that Jonas had to do at some point in her life. It was just waiting for the right time. Jonas’ paintings are abstract treatises of feelings, that have recently started featuring also human figures. People- and Youngsters-artworks have had a pulse to the figures from the commotion of a shopping mall, in the center of which is located an empty office where Jonas worked and exhibited for a while. Artwork representing an old lady and the sea, Old Lady and the Sea differs from the others in terms of its atmosphere. In its calmness is also present the layers of time.

Around the exhibition, the fact that the painter is still rather young in artist years, maybe shows as a kind of disunity. As such especially the suspension in the top floor of the gallery leaves some sporadic paintings different in a way. Between them was not built a continuum, where the connection between the artworks could in the end have made it something more and else than the sum of its parts. Jonas’ special strength is definitely colors. Her works have a very unique and wide color scheme from their scale. You can not absorb that from anyone else, but it is the expression of the artist at her best. Leena Kangas

Plus: Anita Jonas who is absorbed in painting, inspired by the inherited acryl colors, has developed incredibly quickly into a steady painter, whose special strength is a delicate sense of colors.

This website uses cookies to improve your experience while you navigate through the website. Out of these, the cookies that are categorized as necessary are stored on your browser as they are essential for the working of basic functionalities of the website. We also use third-party cookies that help us analyze and understand how you use this website. These cookies will be stored in your browser only with your consent. You also have the option to opt-out of these cookies. But opting out of some of these cookies may affect your browsing experience.
Necessary Altid aktiveret

Any cookies that may not be particularly necessary for the website to function and is used specifically to collect user personal data via analytics, ads, other embedded contents are termed as non-necessary cookies. It is mandatory to procure user consent prior to running these cookies on your website.